The Duke Institute for Brain Sciences (DIBS) is pleased to announce Roberto Cabeza, Ph.D., Professor of Psychology & Neuroscience and Psychiatry & Behavioral Sciences, as the newly appointed director of the Center for Cognitive Neuroscience (CCN), one of DIBS' flagship centers. Originally from Buenos Aires, Argentina, Dr. Cabeza studied in Japan and Canada and arrived at Duke University in 2001, where he is now one of the most visible cognitive neuroscientists today. Dr. Cabeza investigates the neural mechanisms of memory in young and older adults using behavioral, brain imaging, and brain stimulation techniques. He has more than 160 publications and maintains a long history of service to Duke University and to the discipline of cognitive neuroscience. Dr. Cabeza has organized numerous conferences and symposia and is an active member of the Cognitive Neuroscience Society. He is an experienced member of NIH panels and editorial boards and has edited several volumes, including Handbook of Functional Neuroimaging of Cognition (MIT Press), Cognitive Neuroscience of Aging (Oxford University Press), and Principles of Cognitive Neuroscience (Sinauer), all in their second editions. In 2003, Dr. Cabeza received the Cognitive Neuroscience Society's Young Investigator Award, and in 2013, was inducted as a Society of Experimental Psychologists fellow.

Concurrent with Dr. Cabeza’s appointment, R. Alison Adcock, M.D., Ph.D., Assistant Professor of Psychiatry & Behavioral Sciences, Neurobiology, and Psychology & Neuroscience, has been named the associate director for CCN. Originally from Tennessee, Dr. Adcock studied at Emory and Oxford Universities, receiving her M.D, Ph.D. in neurobiology from Yale School of Medicine and training in psychiatry at the University of California, San Francisco’s Langley Porter Institute of Psychiatry. Her laboratory integrates real-time and conventional imaging, pharmacology, physiology, and behavior to understand how neuromodulatory systems shape memories and future behavior. Her work has been funded by the Dana Foundation, Klingenstein and Alfred P. Sloan Fellowships, NIDA and NIH, including an NIMH Biobehavioral Research Award for Innovative New Scientists to develop cognitive neurostimulation interventions. Dr. Adcock is a leader in bidirectional translation between integrative neuroscience and the disciplines concerned with human growth and thriving, organizing and participating in numerous conferences and symposia, including for Duke and the NIH. She was a 2015 B.F. Skinner Lecturer of the Association for Behavior Analysis International and a 2012 Kavli Fellow and Seymour Benzer Lecturer of the National Academy of Sciences. 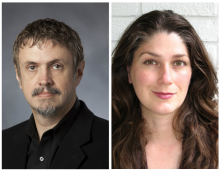