Physics and math training leads to the neurosurgery suite 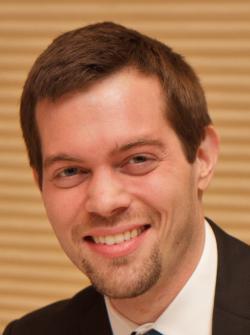 A patient lies on the operating table, fully awake but numb, a patch of his skull drilled open and a tiny wire lowered gently into place by a Duke neurosurgeon and a team of trained professionals. The group is working to stimulate neurons that have been affected by brain degeneration.

But then the team stops, and all eyes turn to John Pearson, a computational neuroscientist. His own heart pumping fast, Pearson hands the patient a joystick. The electrical wire records a precious few cells in the person’s brain as he plays a simple video game, deciding when to click on an expanding balloon on the monitor before him. The larger the balloon gets, the more points he earns -- but at some point it will pop, an unpredictable event. Pearson has 30 minutes or less to gather data, and the clock is ticking.

Pearson is a basic scientist trained in physics and math. Only since graduate school has he worked with real brain data, most of it concerning decision-making. So, his first experiences in the operating room -- a collaboration with neurosurgeons Dennis Turner and Nandan Lad and neurologist Patrick Hickey at the Duke University Medical Center -- he described as “long stretches of boredom, punctuated by moments of sheer terror.”

In this particular line of work, Pearson, an assistant research professor in the Duke Institute for Brain Sciences, hopes to understand what self-control looks like in the human brain. Researchers typically get at this question using non-invasive brain scans, which are nowhere near sensitive enough to pick up activity of individual cells. And self-control is difficult to study in laboratory rodents.

Detail from “Pupil size and social vigilance in rhesus macaques,” Frontiers in Neuroscience, May, 2014.

“In animals, we bribe them to do everything: Do this task and get a reward,” Pearson  said. “But people do things for intrinsic rewards. And we resist temptation on very long timescales.”

Pearson’s as-yet unpublished work from the operating room, made possible by the generous consent of Duke patients, suggests that a motivational signal of sorts slowly builds in the brain before people make decisions like the one in the video game.

Pearson came to Duke in 2005 to work on computational and theoretical neuroscience questions as a postdoctoral researcher in Sri Raghavachari’s lab in the neurobiology department. Two years later, another postdoc he met at a seminar -- Ben Hayden (then in Michael Platt’s lab at Duke, and now running his own lab at the University of Rochester) -- asked him if he wanted to do some experiments together. The lab needed a computational mind.

Pearson agreed, despite never having done an experiment or confronted its messy data. The research was about what happens in the brain when a monkey is considering a tradeoff between two actions: exploiting or exploring. For example, should the monkey eat from one tree, or to take the risk to search for another tree? Previous research had investigated choices like these using non-invasive brain scans, but Pearson’s and Hayden’s study, published in Current Biology in 2009, was first to investigate the decision at the single-neuron scale.

Transitioning into Platt’s lab, first as a postdoc and then as a research scientist, Pearson continued to make sense of the neural underpinnings of decisions using computational modeling. For a 2011 study, he integrated neuronal activity recordings gathered over the course of a decade in Platt’s group, to inform a new ideas of about the function of the posterior cingulate cortex, a highly connected but somewhat enigmatic brain area.

Throughout his time at Duke, Pearson has come to realize in the next decade, the field of neuroscience will be saddled with ever-expanding volumes of data for exploration: a daunting but exciting prospect for specialists like himself in computational neuroscience and statistics. “As we’re collecting more and more data, it’s very easy to wind up finding something that looks like a signal but is really just noise,” he said.

Starting as an assistant research professor in January of 2015, with a career development grant from the National Institutes of Health, Pearson is also devising methods to analyze big data in neuroscience. Working with data from Platt’s lab, for instance, he is analyzing neural recordings of monkeys that are watching videos of other monkeys’ behaviors, to be able to see whether he can tell (based on the brain activity alone) what actions they were watching.

Pearson is also building infrastructure to analyze datasets from brain scans -- 1000 brains at a time -- using a powerful cluster computing system called Spark, which was developed by researchers at the University of California, Berkeley’s AMP lab. The infrastructure allows Pearson to run all the data at once and with multiple algorithms, rather than the traditional way of running analyses separately, in single-file.

“I’m obsessive about writing code that is fast and that allows people to iterate their ideas,” Pearson said. “When you do exploratory science, you often don’t know exactly what you’re looking for. The ability to test many ideas quickly is probably the single most powerful enabler of good science that I know.”

Pearson and his wife, Amber, a Research Scholar at the Kenan Institute for Ethics, recently bought a house in Durham and are expecting their first child in early March. When he’s not working with data, he’s reading or participating as an active member of his church.