Crossword puzzles showed an advantage over digital brain games in sharpening memory among older adults with mild cognitive impairment, according to a study in NEJM Evidence.

In a randomized, controlled trial led by Murali Doraiswamy, MBBS, FRCP, director of the Neurocognitive Disorders Program and a professor of psychiatry and geriatrics at Duke University School of Medicine, and D.P. Devenand, MD, professor of psychiatry and neurology at Columbia University, researchers determined that participants, most of them around age 71, who trained in doing computerized crossword puzzles demonstrated greater cognitive improvement than those who were trained on computerized cognitive games.

“The results were surprising and important as we look for ways to reduce the risk for Alzheimer’s and other types of dementia,” said Doraiswamy, who is a member of the Duke Institute for Brain Sciences and studies healthy brain aging and Alzheimer’s disease. 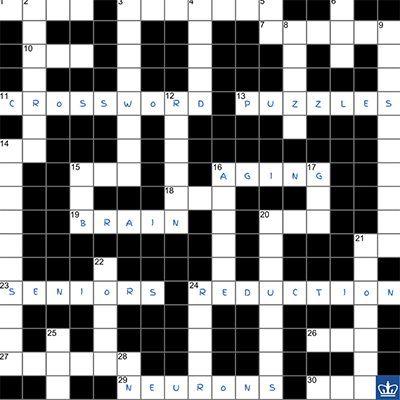 Crossword puzzles are widely used but have not been studied systemically in mild cognitive impairment, which is associated with high risk for dementia, including Alzheimer’s disease.

Researchers at Columbia and Duke recruited 107 participants with mild cognitive impairment to complete 12 weeks of either computerized crossword puzzle training or cognitive games training, followed by six booster sessions for up to 78 weeks. The crossword puzzles were of medium difficulty, intended to be equivalent to The New York Times’ Thursday puzzles. The cognitive games included memory tasks, matching tasks, spatial recognition tasks, and processing speed tasks.

The most striking findings of the trial described in a Columbia University news release were:

“Hitting the trifecta of cognitive improvement, improvement in daily functioning and slowing brain shrinkage is like a holy grail in the field,” said Doraiswamy, a member of the Center for the Study of Aging and Human Development. “To date, no drug in the Alzheimer’s field has hit all three endpoints.”

Remarkable strides have been made in understanding Alzheimer’s disease. While there is no cure, new treatments have been geared toward supporting brain signaling and slowing disease progression.

Doraiswamy has been involved in multiple fronts of dementia and Alzheimer’s care, from researching new drugs and diagnostic tests to examining technology tools that could empower seniors to enhance their brain health.

“Crossword puzzles are obviously not going to be a treatment by itself,” said Doraiswarmy. “But if these effects are replicated and expanded in future trials, crossword puzzle training could become a home-based, scalable, cognitive enhancement tool for individuals with mild cognitive impairment.”

The authors note that the older age group may have been more familiar with crossword puzzles than the computerized cognitive games. Nevertheless, most adults remained in the study, which had a low drop-out rate of 15%.

“Most people don’t think of crosswords as a therapeutic for brain disease. They play them because they enjoy it,” Doraiswarmy said.

Strengths of the trial, he said, are the 28% participation rate of individuals from racial and ethnic minority groups and the low drop-out rate for such a lengthy home-based trial.

A limitation of the study was a lack of a control group that did not participate in cognitive training.

“The next step would be to try to confirm the findings from crosswords puzzles in a much bigger study and to determine if participants not only hit the endpoints, but if we can also postpone or delay the diagnosis of dementia,” he said.

The study received funding from the NIH National Institute on Aging (1R01AG052440).

Lumos Labs provided the computerized platform but was not involved in study design, data analyses, or publication. Dr. Doraiswamy is an advisor to Lumos Labs as well as several other companies in this field. The study was overseen by an independent data safety monitoring board.